More
The Origins of Tardis Stables 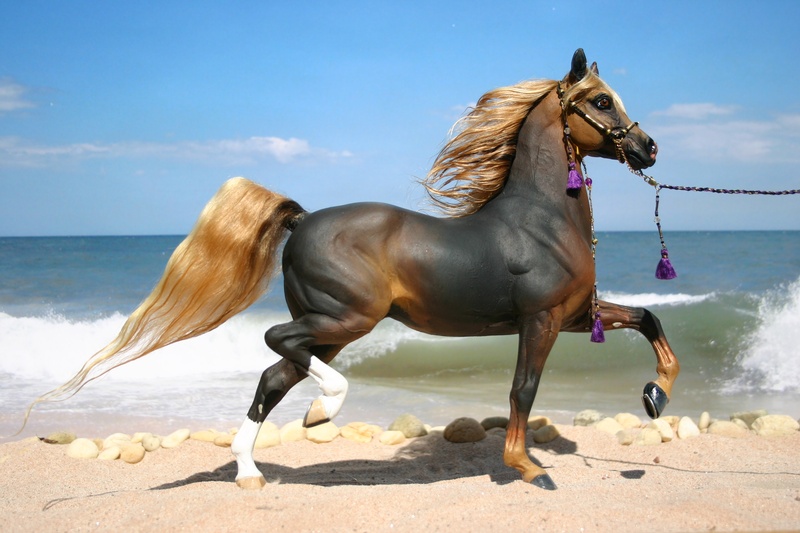 The first Breyer of Tardis Stables was a 1962 issue Family Arabian Mare named T'Pal, but the hobby remained in the future for her, and my then 5 year old self. I bought a few models in 1978, but never discovered the young blooming hobby even then. I just fulfilled that old need to collect critters, and a new job allowed me to buy the big expensive horses to add to my critter collection.

I discovered the hobby back in 1986, when I found the model horse world that lurks behind the covers of JAH. That first issue in 1986, which I receieved a mere week after moving to our new home, astonished me and drew me into the vortex known as model horse collecting and showing. This fascination gave birth to Tardis Stables.

My very first repaint was a Legionario II, called TS Aluvame Sunspots, whom I still show to this day, and in my brief stint of live showing a decade ago, she even placed! Its been many years since those early days, but I am still enjoying all this hobby has to offer.

Though I have scaled back the amount of Customs that flow out of this old house, I still very much enjoy this craft. I use acrylics when painting, and use mohair for mane and tails. I still love the haired model, even though the sculpted mane and tail seem more popular now.  Breyer molds I like to work on include the Proud Arabian Stallion, Adios, Stud Spider, Clydesdale Stallion, 5-Gaiter, Midnight Sun, San Domingo, Roy, Lady Phase and the Western Horse. The newer Huck, ASB, NSH, Strapless, Silver, and many of the Stone molds have become favorites to work on as well. I don't do as many PAS or Western Horses these days because of the newer molds like the Breyer ASB and the Stone Arab. My specialty is Drafter breeds even after all this time.

Because of time constraints, degenerative disk disease and arthritis in my neck, glaucoma, and other life obligations, I do not take in as many custom orders as I once did, however, I still will accept a half dozen or so a year from trusted customers. My turnaround time is quite long these days, and because of that, I plan to offer customs via occasional saleslists and on Ebay, so check there occasionally if  you are in the market for one of my models.

My current herd of OFs and CMs stands at around 200+, not counting the slew of SM, Lbs and other mini sizes horses in my studio hutch. I photo show extensively, in such places as MEPSA, OFCC, and AMAHA. I also show online in TOPSA and IMEHA, amongst others.

Times have changed since 1986, but Tardis Stables still strides strong on the backs of its many steeds!

If you are interested in contacting me, feel free to email at RiaP57@aol.com

For my reader fans! My  Author page at Amazon.com!

RELEASED Dec 2017!! After decades of work! THE SECRET LIFE OF MODEL HORSES!

KHAN: A MAINE COON ,  a semi fictional account of his life from HIS point of view is  available on Lulu.com, Amazon.com and other  online booksellers!!  Hardcover, paperback, Kindle and ebook versions available!!

Visit Lulu.com  and Amazon.com to check it out! KHAN: A MAINE COON 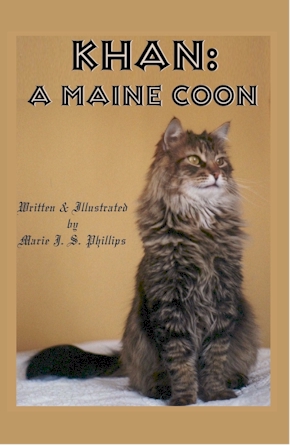 Check out samples of my books at   http://www.mariejsphillips.com/  and for purchase, check out my author page   http://www.amazon.com/Marie-J-S-Phillips/e/B006GSBNAG

For all who love Kindles:

About the Creator of Tardis Stables

Born in 1957, in Huntington, on Long Island, N.Y., I was driven by an insatiable love of writing, art, and the sciences since very early childhood. My love of animals fueled my desire to write and draw, always appearing as stories, and artwork from the non-human point of view. Horses always dominated my portfolio. In college, I majored in Art and Earth Sciences, where inspiration fired my weird vivid imagination, planting the seeds for my science fiction novels about an alien family, driving me into the unique and futuristic world of Fantasy/Science Fiction. The first two books in the series are available!!

The semi-fictional biography of Khan, done from his point of view, which follows my sweet departed Maine Coon's life from near birth to death and beyond is available!  I may be adding another cat semi fictional biography to my repertoire as we lost Khan's best buddy Phantom in Aug 2007 to kidney failure. See his page ODE TO PHANTOM and his album on other pages. We lost another of my Maine Coons, Indy, the following January to cancer, and in May 2012, we lost Warlocke, my eldest at 17 years old, to cancer. Then to our dismay, we lost big Kai January 26, 2015 to aggressive kidney disease at only 12 years old.  They all have their own pages, and their stories for publication are in the works.

When I'm not working on models, I work on the scifi novels. Sadly my literary Agent, David Ayscue, passed away Sept 2010.  Instead of searching for another agent, I have decided to go strike out on my own using Lulu.com!  As seen above I successfully got three books in print. I've also written fictional stories about my models, which is published under the title The Secret World Of Model Horses-Volume One..

I've gotten into WARRIORS by Erin Hunter and have even delved into writing fan fiction in this venue, which I do purely for fun! The name of the tale is called NEW BLOOD-Born of Smoke & Fire which is posted on the Warriors fan fiction board,  http://wcrpforums.com/thread/293/blood-born-smoke-fire-complete

An injury to my feet in 1988 sidelined me from the working world and ever since, I've been home, able to indulge in writing and modelling. Life is good most days, despite the development of degenerative disk disease in my neck, which has slowed me down quite a bit in just about every aspect of life. I was diagnosed with glaucoma in 2009, and that hangs like a black cloud over my head many days because my biggest fear my whole life was, is and always will be-going blind. But so far, all is stable.

Years ago I delved into the world of model cats, creating Demoncoons Model Cattery for my many model showcats. The first of these models I created for the Klingon club I once belonged to ten years ago. These Maine Coon cat models served as Suvwi Khetz, but now show as earthly Maine Coons. My 1st Maine Coon Cat, a dapper tuxedo named Demon, is the inspiration for the Cattery name. My model cattery stands at about 75 and counting, with cats of all breeds.

I also began collecting model dogs again after a long hiatus. I still have my collection of small plastic toy dogs, of which very few are showable by today?s standards. I have several nice models showing now, and am slowly building up the Dogs of Tardis kennel.

I also show wildlife and prehistoric life models under the Tuliptree Wildlife Preserve moniker.It is truly a blast setting up backdrops for TRex and other long extinct animals, as well as birds.

I also enjoy spending time with my beau of 43 years. High school sweethearts since 1973, we bought our 1st and only home in 1986 and  finally married 25 years ago in 1991. We love catching our favorite sports on television, and always made the annual pilgrimage to Shea Stadium every summer. The 2009 season was  bittersweet since Big Shea was demolished and replaced by Citifeld. We will miss Big Shea Stadium as it was a special place!  Citifield, however is beautiful and I'm addicted to Shake Shack FRIES!!!!  Someday, we'll make the pilgrimage to Florida to see a Miami Dolphin game, and hope the MIami Dolphins return to their form they had in the 70s and during the reign of Dan Marino.

Its so hard to believe the last 28 years have flown by so fast and I am not that young novice gawking at all the wondrous photos in that first JAH magazine. I hope to enjoy this hobby for more decades to come.

Many of my older works are featured in the Model Horse gallery at this link!

Take a peek if you are intrigued.